depicting the contemporary life in India with its both pros and cons.

Dr. Manisha Patil has written review of my Book.

A Gold Medallist in MA (Hindi) from University of Mumbai, a Research Scholar at Banaras Hindu University under the Research Awardee Scheme of UGC, an Associate of Indian Institute of Advanced Study, Shimla and Assistant Professor at K. M. Agrawal College, Kalyan—these are some of the credentials of Dr. Manish Kumar Mishra. Till date he has edited 11 books, published two anthologies of poems and presented more than 20 research papers at national and international conferences. स्मृतियाँ (Memories) is his first collection of short stories.

स्मृतियाँ (Memories) consists of 11 short stories depicting the contemporary life in India with its both pros and cons.

It is a character sketch of Jahara, a low-caste widow who through her hard work and honesty succeeds to live an honourable life. As a young widow, she undergoes sexual harassment both inside and outside the home. But instead of succumbing to it as her fate, she fights against it by exposing the culprits in front of the whole village. She even cuts the nose of Thakur’s son with her sickle when he tries to rape her in the farm. Eventually she becomes the leader of all the downtrodden people in the village, winning the village panchayat election twice.

It highlights the corruption in Indian educational system. Taking Gokulnath Tripathi Mahavidyalaya, Gonsaipur, District Jaunpur, Uttar Pradesh as a case study, it illustrates how mass copying / cheating in board examinations has become a profitable business promoted by an elected MLA. In this top to bottom chained system of corruption, those who are unwilling to participate are harassed by others and therefore everybody has to join the bandwagon.

It shows how the evil of honour / horror killing is still prevalent in India. Photo Rani, the protagonist is the only child of her high-caste father who kills her as a punishment for her crime of falling in love with a low-caste boy. For her father, the so-called honour of his family and caste is more important than the very life of his daughter.

It is a character sketch of the narrator’s mother. Faced with the depression due to his mother’s death, the narrator finds the hope and strength to live on in the memories of his mother.

Written in the epistolary style, it attempts to counterbalance the negativity of COVID-19 epidemic with the positivity of the common people. The fear of death and the hardships of lockdown are psychologically eased by the destitute people by worshipping the Corona-Mai and naming their children as ‘Lockdown Yadav’, ‘Quarantine’, ‘Corona’ and ‘Sanitizer’ (55).

It highlights the malpractices in the Indian universities through irony and satire. Here the unworthy prosper and the virtuous suffer whereby the narrator is faced with dilemma of adapting to a system that leaves him deeply dissatisfied. He says, “Working here is a deep and serious complaint to myself which I am ignoring constantly.” (66)

It explores the thoughts and emotions of the narrator at a night when he is anxiously waiting for his fiancé’s response to his marriage proposal. In his mind, he revisits his first meeting with Kashika when he had arrived in Banaras for the first time. Then follow the memories of their numerous daily meetings till date, culminating in his marriage proposal at Mankarnika Ghat, the crematorium. Upon reflection, he feels that his marriage proposal is the silliest thing he has ever done causing him annoyance in case of both positive and negative response.

It is a character sketch of a ‘hybrid’ Indian girl Mridula Chamikutti whose father is a Brahmin from South India and mother a Rajput from Rajasthan. With her, the narrator roams around several places in Rajasthan and tastes various types of delicious food. Though, Mridula hesitates to take the ‘final decision’ of marriage with the narrator, it is very much evident that she deeply loves him. As a result, the narrator appreciates her affection, faithfulness, simplicity, purity and dedication and hopes for his joyful life’s journey with her in the future.

It is a short but sweet account of the unease caused by Mr. Trivedi’s anticipatory action of framing his grandmother’s photograph before her actual death.

The protagonist Rakesh Kumar works as a Food Inspector in Kanpur and wishes to appear for UPSC examination. When he approaches his senior Mr. Rastogi with an application for without pay study leave, his application is rejected. However instead of getting dejected, he solves the problem by raiding adulterated food supply of influential traders in the city who normally get away with the crime by bribing the Food Inspector. As a punishment for his honesty, Rakesh is suspended from the service which turns out to be a blessing in disguise as now he gets 50% paid leave for his study.

This last story is also the title story of the collection. In a stream of consciousness, the narrator presents his musings and memories about three significant people in his life viz. his dead mother, his ex-fiancé and an Aghori Baba he had met in Banaras. His dreams and memories of them turn into a kind of premonition and save him from an accident. However, soon he develops the fear that what if these three characters in his memories meet each other outside his mind. Counselled by the psychologists, he realizes that all this is a play of his subconscious mind.

The story lends itself to the feminist criticism whereby in spite of her hardships, Jehara emerges as a strong and liberated woman countering the double oppression of caste and gender. However, she does not challenge the caste hierarchies itself and rather accepts untouchability as a given norm.

The story is too realistic to be called a fiction. The precise mention of the location, the use of representational names and titles, dialogues in the colloquial language and the reference to real events turn it into a reportage. The statements like ‘Don’t know why he felt like there are no teeth in his mouth; only tongue is moving everywhere. Will he not be able to bite anymore? Will only licking be left in the life forever?’ (29) lend precise analysis of the situation in perfect words.

It is neither the first nor the last story about the evil of honour / horror killing still prevalent in India. But the way it is narrated makes it special. The trauma of Photo’s mother is routed through her dreams and the brutality of her father is hinted by the statement, ‘Maybe she was dragged to the river, then beaten up half-dead with sticks, finally burnt on the funeral pyre. She had committed the ultimate crime loving and that too outside the community.’ (35) The undertone of pathos pervades the whole story.

It is a simple story full of nostalgia. The life of the narrator’s dead mother is brought to life through various episodes in her life and their emotional impact on the narrator.

The story uses the longstanding popular epistolary style in the form of emails. It is primarily through the emails that positive thoughts about life and death in the times of COVID-19 are communicated to the readers thereby obliquely emphasizing the significance of interpersonal communication in life.

An example of excellent use of irony and satire, the story exposes the harsh reality of the widespread corruption in higher education in India along with the helplessness of the people involved.

The story lends itself to the geo-criticism whereby while telling the story of his first meeting with his fiancé Kashika in Banaras, the narrator draws the verbal map of the city of Banaras. From railway station to Banaras Hindu University to Kashi Vishwanath temple, the local colours of Banaras are brought to life by the marvellous language of the writer.

The story lends itself to the geo-criticism whereby while roaming around several places in Rajasthan with his fiancé Mridula, the narrator enumerates their delicacies and local colours in great detail.

A small event is narrated so brilliantly that its moral of the story is emphasized in the following statement: ‘Though his intention was good, he blundered by considering himself greater to the Nature and the God’s will. We must resist such hasty decisions.’ (97)

While Nakal-Dham and Vibhagiya depict the helplessness of the people involved in a corrupt system, Sarkari Niyamanusar shows how that unjust system can be bypassed through proper channel. It lends a ray of hope to all those who feel caught like a small cog in the huge machine called ‘system’.

The story lends itself to the psychoanalytical criticism whereby the narrator’s musings, dreams, memories, fears and premonitions mostly focusing on three characters viz. his dead mother, his ex-fiancé and an Aghori Baba he had met in Banaras fuse together in a stream of consciousness.

स्मृतियाँ (Memories) presents a very vibrant picture of contemporary India with all its contradictions—villages and cities, traditions and modernity, love and honour / horror killing, realism and satire, corruption and morality to name a few. On one hand, it provides the character sketches (Jehera, Maa, Vo Ladki), on the other, it draws the verbal map of various places (Nakal-Dham, Vo Pehli Mulakat, Vo Ladki). It will not be an exaggeration to state that the author has succeeded in capturing the soul on contemporary India in his stories. In my opinion, this collection of short stories deserves to be translated into other Indian languages including English. 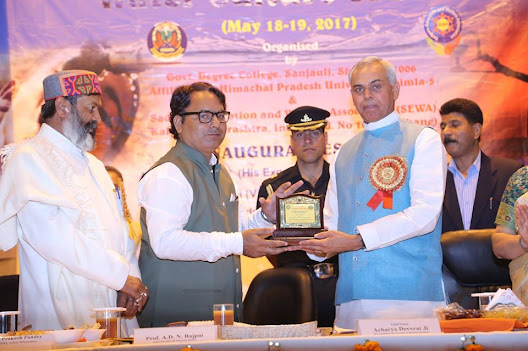